The National trust compound, the unique First Republic Spitzer villa of the chief sales officer of Vítkovice ironworks, Engineer, Dr., honoris causa Julius Spitzer, built between 1930 and 1932 in the middle of a beautiful garden of the complete area of 8,500 square metres is currently for sale again. The completely furnished villa the functional and artistic complexity of which is absolutely unique is located two kilometres from the town of Rýmařov, approximately 250 kilometres east of Prague, 130 kilometres from Brno and 50 kilometres from Olomouc.

If you are interested in getting our catalogue please send us your request via contact form. +420 777 816 220 lucie.soukupova@chateau.cz
Contact us
Price on request
District: Bruntál
Distance from Prague: 250 km

The château villa is a physical representation of Spitzer´s travelling experience, education, social respectability and at the same time love to his native area. The functional and artistic complexity of the compound is indeed absolutely unique.

Although the villa was designed by a Viennese architect Gustav Schöller in the style of French opulent châteaus on Loira river the construction was assigned to the local construction company of Rýmařov. The steel construction of the roof trussing was made by the bridge constructing company of Vítkovice ironworks and for the roof covering roofing slate from the deposit in Nízký Jeseník was used. The interior harmoniously applies some art deco elements according to the designs of a significant architect and painter František Kysela, active at Academy of Art, Architecture and Design in Prague. The garden was designed by professor Friedrich Henn from Lednice.

Although the château villa was primarily built for the second wife of Julius Spitzer it was at the same time supposed to serve as a seat of the family of Spitzer, the family of highly educated attorneys, technicians and scientists. The characteristic atmosphere of this seat was thus naturally very attractive both for the Nazi who confiscated the villa during the war and for the Communists who appropriated the villa after the war. The new owner will still enjoy the original equipment of the villa that has been almost completely preserved (including the furniture and other house contents of the property of the family of Spitzer).

Spitzer château villa does not only represent an architectural masterpiece. It is a place of unusual historical legacy, spirit and independent future.

The description of the château villa

The Viennese architect Gustav Schöller designed the villa in shape of three wings grown together in shape of the letter Y with corner towers and an oval terrace on the southern side of the building. 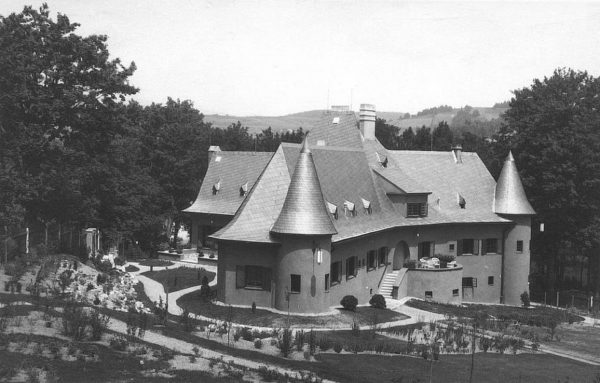 At the express wish of the chief sales officer the complete villa was designed as a smaller château seat both in its composition formation that uses the corner rounded towers, the outer winding staircase into the garden, high roofs, side garages designed as towers and a greenhouse boiler room. as well as in its disposition conception and artistic jaggedness with some stucco decorations and other ornamental and artistic elements. The roofs are covered with roofing slate from the close deposits of the chopping low-carbon slate.

In 1960 the villa underwent a significant reconstruction. The building incorporates the indoor sewerage system, cold and hot water distribution, TUV warming is secured in two gas tanks. There is the central warm water heating with two gas boilers JUNKERS, partially the heating in the southern part is managed by the fireplace and tiled stove for solid fuel. The building disposes of complete wiring and the lightning rod.

The complete compound consists of a few buildings, the largest one being the villa itself with its original peculiar three-leaf ground plan. The compound disposes of an operating and dining background, shared space of the dining room and community room. In seven apartments, there are in complete 14 living rooms, 7 bathrooms and six other independent sanitary facilities.

In the basement there is a suite, the reception and the farming background (a boiler room, a laundry room and the cellars). The original style and equipment have only been preserved in some parts of the suite and the hall with the staircase.

On the ground floor, there is the entrance into the flat and the entrances through the library along the central corridor into the garden. The floor was originally divided into the suite for the lady of the house and the suite of the lord of the house that apart from the bedrooms and bathrooms also incorporated the cloakrooms and studies. The central part of the floor is the community room which continues in the western wing into a spacey dining room and a kitchen. Both these rooms lead directly onto the southern terrace. The original style and equipment have mainly been preserved in some parts of the dining room, in the community and communication hall, study and a bigger apartment of the suites. Of the original equipment, you will find here: stucco ceiling decorations, inlaid furniture, marble coverings of the heating, art nouveau writing desks, original chandeliers and lamps, stools, beds, chests of drawers, armchairs, oriental carpets, tableware, a decorative tile stove, original bathroom equipment and many other things. 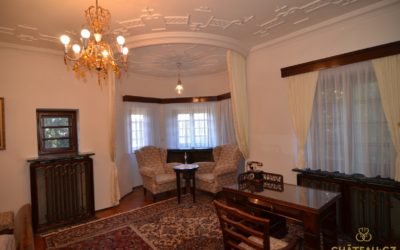 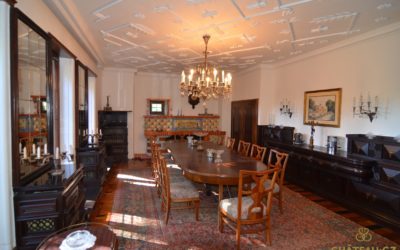 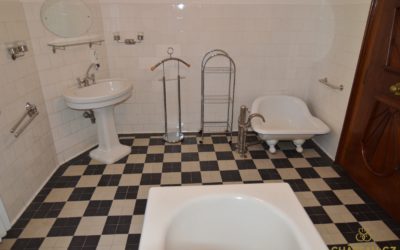 In the attics, there used to be children´s rooms and a bathroom. Today there are other suites with a few rooms. In the central part of the building under the elevated roof there is another suite accessible by the winding staircase. The construction and the equipment originate from the more modern time of the reconstruction in 1996.

In the hill facing the château there is a building with a garage and the driver´s flat and warm greenhouse, later turned into a sauna.

Not far away there is an independent building of the greenhouse (later a billiard hall). The complete compound including the property on which there is a tennis court has special fencing with a gate with the remote control and a little gate with a stone staircase.