The ruin of the castle Dražice is situated on a rocky promontory beyond Jizera river. Of the originally opulent gothic castle probably founded by the burgrave of Prague castle Řehoř of Litovice in the middle of the 13 th century only a small torso and a castle granary have been preserved until today. Thanks to the close distance from the capital, location on touristic and cycling tracks and generally easy accessibility it represents a place ideal as a destination for one-day trip as well as for giving social and cultural events. There is a study for a possible reconstruction and use of the compound. Dražice is a part of the town Benátky nad Jizerou and is located approximately 40 kilometres from Prague.

Driving along the highway D10 in the direction to Mladá Boleslav you cannot miss a romantic ruin of the castle Dražice. 220 metres above the sea level it is erected beyond the river Jizera as a remider of our history. The originally gothic castle was most probably built in the middle of the 13th century by the burgrave of the Prague castle Řehoř of Litovice. The castle resisted burning down (first time by the Hussites, second time by the army of king George of Poděbrady), it was reconstructed each time. When, however, it was deserted by the family of Donín in the 16th century, most probably for more comfortable living in the castle in Benátky nad Jizerou, the fortress went to ruin completely. The ruin has been on the National heritage list of CR since 1958.

Castle Dražice is well accessible, it is situated at the turning of a road at the end of a village of the same name. Some touristic and cycling tracks finish here or pass by. The distance from the capital is approximately 40 kilometres.

The granary is the building at the western end of the compound. The built area is 416 square metres. It has three floors Its indisputable advantage is the fact that the construction permit has already been issued for a project of constructing a restaurant. There is an electric access line in the granary building.
The complete area of the property is 2,500 square metres.

Château.cz and Studio Anarchitect prepared a study on renovation of the ruin and on the use of the building. We can see in the compound both the necessity of preservation of a torso of a gothic monument as well as a number of possibilities for use, especially in the area of free-time activities and weddings. The renovation would take place in several phases and it would include mainly the reconstruction of the existing compound – it counts with the repairing of the palace with the chaple that is in disrepair, with the use of the granary as a minibrewery with a restaurant,the adjustment of the courtyard besides other things for giving small cultural and social events and with the rehabilitation of the greenery within the compound. The project is being prepared in cooperation with the town Benátky nad Jizerou.
Vizualiation Studio Anarchitekt: 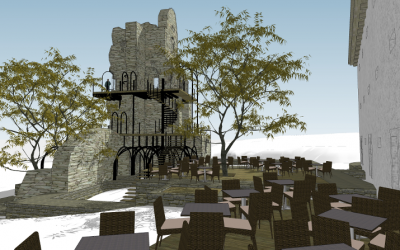 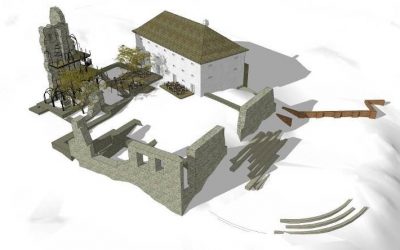 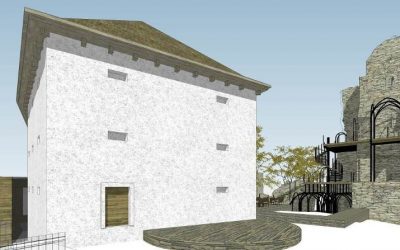