Château Choustník was built by the family of Černín in the first half of the 17th century in late renaissance style. Later the château was in possession of the family of Špork and was rebuilt in baroque style. In the 19th century it was enlarged and got its current shape. The family of the prince of Rohan were the latest owners of the château. The rectangular one-storey building without significant architectural elements constitutes the western side of the village centre. Behind the château there is an extensive park that has recently been revitalised. The complete area of the château compound is 7,2 hectares. The châetau with the farming wing and the château park represent a precious testament of a country manorial seat. The château is located in a South Bohemian village of Choustník, 20 kilometres from Tábor and approximately 100 kilometres from Prague.

If you are interested in getting our catalogue please send us your request via contact form. +420 777 816 220 lucie.soukupova@chateau.cz
Contact us
Price on request
District: Tábor
Distance from Prague: 100 km

The château is located in the centre of the village Choustník directly next to the church. The château constitutes the corner of the village centre and closes its longitudinal axis. From the eastern and northern sides the building is bordered by the local road. From the southern and western sides it is bordered by the courtyard that further continues as some château park greenery. The neighbouring buildings from south-west, south and south-east are family houses with one above-ground storey and a loft. On its eastern side it neighbours with some grown greenery and the village centre. On the northern side there is the local church with the surrounding cemetary. From the western side it neighbours with a building from the 70ies to 80ies of the 20th century.
The château building represents a dominant construction in the village yet is not significantly visible as it is overshadowed with some grown greenery from the village centre.The architecture of the building itself is not conspicuously formed and has lost clear concept as a result of a number of completions and adjustments. It is a two-storey building, where the second floor which constitutes the only unifying element in the facade is more important from the architectural point of view The use of partially decorative and conspicuous windows on this floor represents the unifying element.

With respect to the preserved original construction as well as decorative elements, including sgraffito decorations of the facades, this building represents a precious source of information about the development of construction technologies in this region which gives valuable evidence especially of late renaissance and mannerism periods. The château with its farming wing and château park bear valuable testimony of a village manorial seat. The château is on the National Heritage list.

After 1945 the château started to serve as an old peoples home and has done so until recently.Its current owner bought the property in 2012 from its original owner who did not maintain the château.The eastern part of the building is in the stateof serious disrepair

Building permit and revitalization of the château park

In 2011 projection work on the renovation of all château compound and attached buildings started including the realization of paved surfaces and all engineering network. The construction permit for complete reconstruction was issued in 2012 with the purpose of the modernization of the château building which has three floors including the attics and is partially cellared on two levels.The intended construction was a multipurpose building with a restaurant, a brewery and 15 flats.

Visualization of the Château Studio LEN+K: 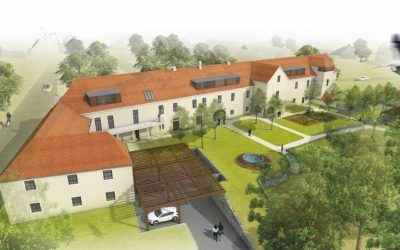 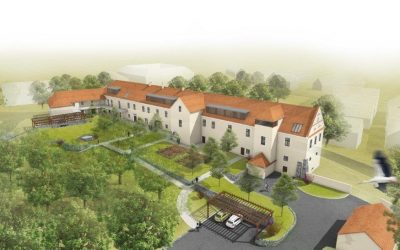 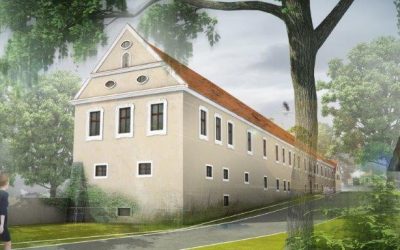 The building permit is included in the sale.
In 2015 The renovation project of the château gardens and the château Choustník got a subsidy for complete revitalization of the château park from the operation programme of Natural environmen which has already been realized.

Wastewater-complete sewage water from the château is currently taken to the public sewarage system through the existing sewarage connections. The sewarage connection can be preserved and with respect to the capacity of the building its capacity does not need to be changed