An originally Romanesque castle Kinsberg – Starý Hrozňatov was built before 1200. In the 19th century it was first rebuilt into a late baroque château and after that adapted into its current shape of a pseudo-gothic château.The château compound consists of construction completely reconstructed historical buildings – château, château church of The Holy Trinity and the caretaker´s house. The complete compound is closed by a newly built wall. The total area of the château compound makes up 20,560 square metres. The château Starý Hrozňatovi is located in Cheb district in West Bohemia, approximately 10 kilometres from Waldsassen (Germany), 200 kilometres from Dresden (Germany) and 170 kilometres from Prague.

Black Tower and the church of Holy Trinity

In place of the current château in Starý Hrozňatov there used to be a castle on a rock above a brook, the oldest part of which is the preserved rounded Romanesque tower with more than 3 metres thick walls and of the circumference of about 32 metres and a tower of the same height called Black tower. The tower used to be accessed over the bridge from the neighbouring wall through a small portal on the first floor. On the South- west corner there used to be a four-sided living tower from which a cellar has been preserved of the dimensions 8 metres to 8 metres.
Perhaps only in 1670 the church of The Holy Trinity was built here that served as a château chaple. In its place later in 1758 a new church building of similar dedication was constructed. It is a baroque single-nave non-oriented tower-less building with a cemicircular presbytery and the eastern entrance risalite with a gable above which there is a sanctusnic. In the presbytery there is a male oratory accessible through a corridor directly from the château building. 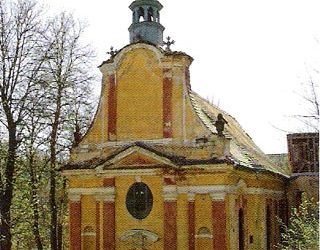 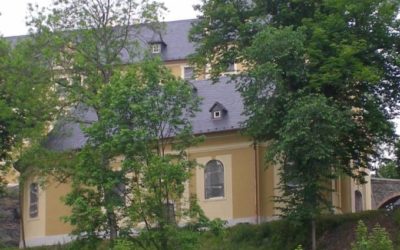 There are plans for the reconstruction of the interior of the château at your disposal in our office.

In the neighbourhood of the historical compound there is a detached compound of a former military company of the area of 24,819 square metres that used to serve as a large capacity dormitory during the reconstruction. There is a project for a senior house here designed by Studio Anarchitekt. The building of the military company with the project can also be the object of sale (it does not constitute a part of the current selling price).